The Love of all things BIG and small 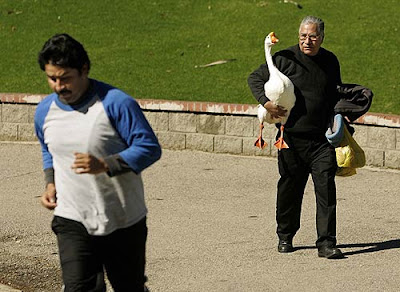 This is the story of a 60 year old electrician Jesus Hernandez and his best friend, Chacho. Twice a week, Hernandez drives to Hollenbeck Park in West Los Angeles with a loaf of bread, Chacho's favorite cereal, to visit the goose he raised since he was a gosling. Upon sighting Hernandez, the big beautiful white bird with its bright orange beak will swim hastily across the park's lake and climb into Hernandez's arms and will gently give him a peck. Hernandez will then playfully toss Chacho back into the water. Gleefully shaking off the drops of water, Chacho will eagerly paddle back for another toss. Eventually, Hernandez and Chacho make their way together, walking side by side to a grassy clearing. Hernandez will lay out on the grass enjoying the warmth of the Southern Californian sun while Chacho rests near by keeping a watchful eye over any strangers that may pass by a little too close. When Chacho is ready to go back into the water, Chacho will gently poke Hernandez with his beak to signal that he wants Hernandez to follow him back to the lake. This has been a regular occurrence for the past two years to the amazement of other park visitors.

This odd friendship started four years ago, when Hernandez went to the pet store, to purchase what he thought was a duckling for $5. The bird was only 15 days old and was very small. But to Hernandez's surprise the bird grew very fast and by the time he was two, Chacho had outgrown his owner's small backyard. Neighbors also started to complain of the loud honking. And so Hernandez embarked on the most difficult task of finding a new home for his feathered friend. That is when Hernandez discovered Hollenbeck Park. It seemed a perfect home with a meandering lake and shady trees and plenty of other ducks and geese for Chacho to befriend.

But leaving Chacho there the first time was heart wrenching. The goose refused to be left behind and followed him back to the car, running as fast as his webbed feet would take him, honking. "It was very hard to leave him. When I left, I was crying," says Hernandez.

Now two years later, Hernandez's visits to the park have become routine. Park visitors frequently witness the big white goose waddle with single minded determination towards Hernandez the moment he steps into the park, and thence commences their stroll together through the park - man and goose. However, to allay the jealousy of other geese and ducks, Hernandez now brings tortillas to feed the rest of them. When it is time to leave once again, after collecting his belongings, Hernandez will lovingly put the goose back in the water beneath the shoreline wall, so that he can make a quiet escape - until the next time.

Assuredly, Hernandez comments, "He's my best friend. I love him and he loves me."

(I wanted to add a couple sentences to this story about happiness and the love and appreciation of all creatures...but I think this story alone says it best).

Click here for an audio slide show of Chacho and Jesus Hernandez.

*The material for this post was taken from a LA Times article titled "Almost a brother goose." It is written by Bob Pool and was printed in the California section February 21, 2009.
Posted by Deeba Haider at 9:37 PM

Email ThisBlogThis!Share to TwitterShare to FacebookShare to Pinterest
Labels: Relationships