Chumash Powwow - A Celebration of Earth, Spirituality and Contradtion 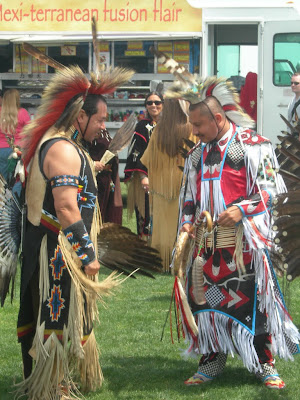 I was lying on my stomach, with muscles like jello, in heavenly bliss, when my favorite massage therapist and I started talking about Native American Powwows. I don't quite remember how we got on the topic, but she was telling me how she attended one years ago and that there are plenty such gatherings in Southern California. Now always having a penchant for Native American culture and spirituality but yet at the same time, still rather ignorant on the topic, I promptly searched online after I loosely glided home from the spa.

That is how I found myself yesterday at the 12th Annual Chumash Day Inter-Tribal Powwow in Malibu. After surveying the abundance of trinkets on sale with little interest, I seated myself on the periphery of a large circle with a fire pit in the center, which from what I have read represents the circle of life. These circles are blessed for the duration of the Powwow, and are considered sacred ground. The Powwow (or Pauwau as they are originally known before the term was mispronounced by European explorers in the 1800s) was initially a gathering for medicine men and spiritual leaders, or a ceremony to celebrate (eg. a victory in war, a successful hunt or a cure of a disease). More recently, the powwow, I think, serves more as gathering to socialize, for the tribes to get together and share songs and to keep their respective tribal history, heritage and cultures alive. 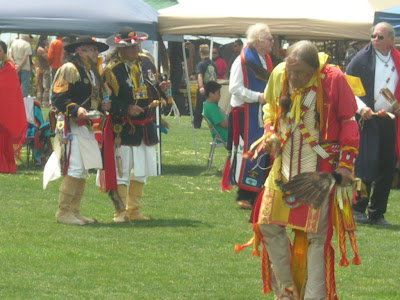 This Powwow started with a prayer given by 74 year old Saginaw Grant (head Gourd dancer, an actor, veteran from the Korean war and member of the Sac-n-Fox Nation). He then led the Gourd Dance (practiced by tribes in Oklahoma), shaking his gourd-like instrument to the drumming and songs of gratitude and the warrior that come from the Comanche and Cheyenne tribes. In the moments of silence between the various events, the MC informed the audience that while the Powwow has been around since the 1800s, for years the U.S. government did not allow Native Americans to practice their culture and religion and it was not until the 1950s that this practice was openly revived. 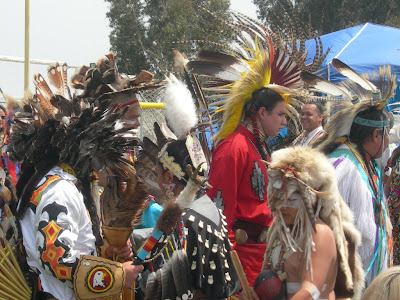 Tribe members in line for the Grand Entry

This was then followed by an offering to Mother Earth which led to the very 'Grand Entry,' where all the various members of the tribes dressed in all their extraordinary regalia entered the circle led by the bearers of the Chumash and the American flags to the hard rhythms and chanting of the flag song, which was explained to be much like a national anthem. In one breath, in one beat they commemorated their heritage and the lands that were taken away from them and the ancestors that fought against this country and yet at the same time, proudly waving the American flag they also sang of the country with which they now belong and have fought for as veterans of the U.S. military. Repeatedly they blessed the soldiers presently fighting America's two wars; in part because so many of them are veterans themselves from the Vietnam and Korean wars and can appreciate the trials and sacrifices of these soldiers. It did cross my mind however, that these Native Americans were a part of the same American army, that hundreds of years ago were in charge of violently removing them from their lands. How time and necessity changes perspectives! In their chants and drum beats, they demonstrated to me how nothing in this world is clear cut, that we all live in shades of gray. 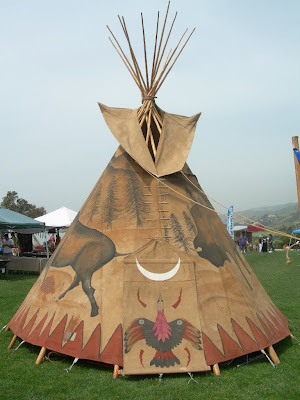 After the 'Grand Entry,' a victory song was sung and the warrior dance ensued. I watched it all while devouring a piece of freshly made piping hot, crispy fry bread with a little honey, cinnamon and powdered sugar.

After a couple more dances, I left the Powwow still in full swing, grateful for another new experience and exposure to a fascinating heritage. 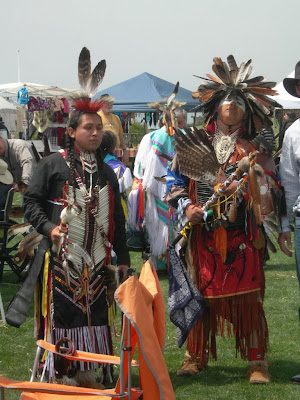 Posted by Deeba Haider at 5:25 PM No comments:

Email ThisBlogThis!Share to TwitterShare to FacebookShare to Pinterest
Labels: Art+Culture

The Hidden Oasis at Lake Shrine 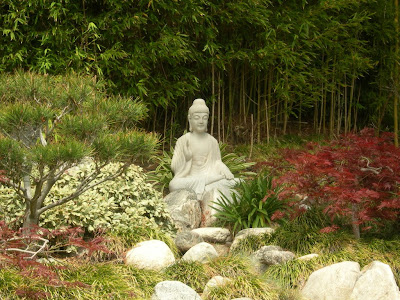 For those of us who live near the ocean in Los Angeles, we already feel incredibly blessed and spoiled by nature. No matter how many times you see it, the grandeur of the ocean always takes your breath away - with all its various shades, moods and light - it is never looks the same. So yesterday, I felt like a kid in a candy store, when I discovered a wonderful oasis less than a quarter of a mile from the ocean in the Pacific Palisades. Now while this is a new discovery for me, this place has been here for sixty years. The Lake Shrine was the brainchild of Paramahansa Yogananda - who was also responsible for introducing Eastern Mysticism and yoga to the west. Originally, a Hollywood movie set, this ten acre site was converted into gardens that promoted peace and meditation, and respectful co-mingling of all religions. The spring-fed lake in the heart of the park is framed by hillsides and flanked by two waterfalls. An old Dutch windmill and a boat house sits on the site, no doubt remnants of the old set. 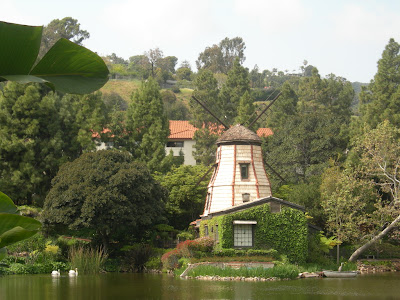 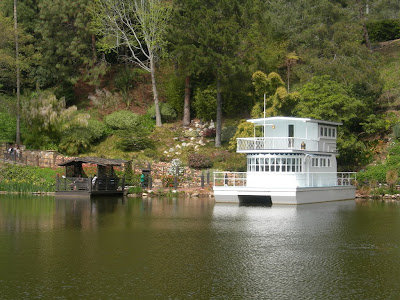 Scattered throughout the park are the statues of Krishna, Christ, the Madonna and child, and the Buddha. The Courtyard of Religions, near the entrance pays homage to the five principle religions of the world - Islam, Christianity, Hinduism, Judaism and Buddhism. The park also holds some of Mahatma Gandhi's cremated remains in thousand year old Chinese sarcophagus. 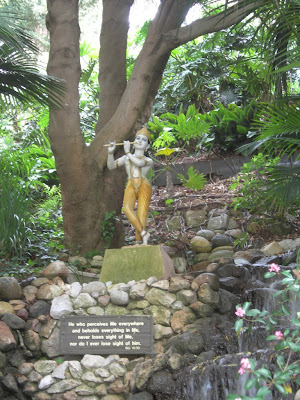 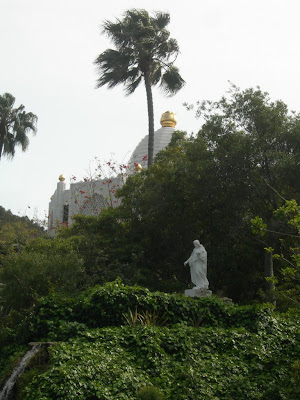 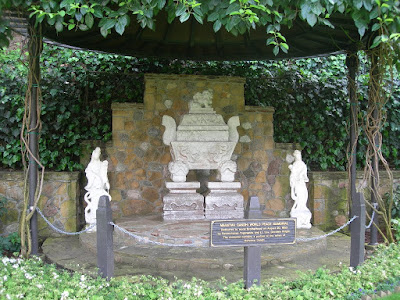 Also inhabiting this park, along side the incredibly rich flora and other vegetation are swans, ducks, a crane, turtles that dive and swim in unison with the koi. Throughout this park's windy paths are also quiet nooks with benches for visitors to contemplate, meditate or just read a book. I went during the busier weekend, and in spite of the crowds, I still left Lake Shrine feeling calmer and rejuvenated. I can't wait to go back on a quieter weekday with my book, to meditate and do a little reading in the company of those peacefully gliding swans and turtles as the sweet aroma of the roses waft by in those gentle ocean breezes. 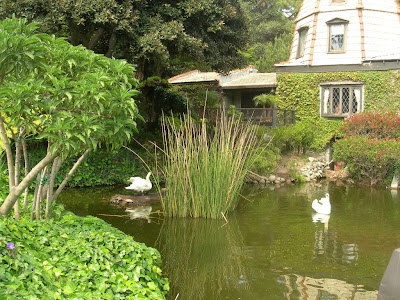 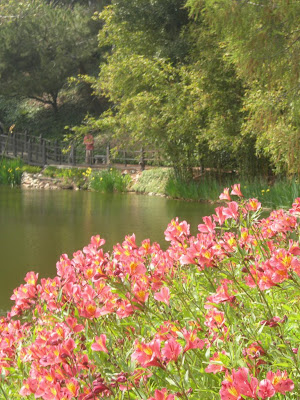 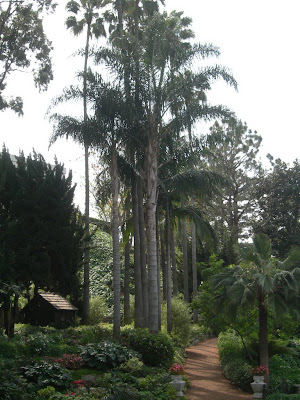 Posted by Deeba Haider at 1:51 PM No comments: