Some thoughts on Speed...

Some days ago, I was reading about the latest technological developments in Japan's bullet train or Shinkansen. I have taken trains in North America (Canada and the U.S), all over northern and southern Europe and in Northern Africa (where the heat made me hallucinate), but it is the Japanese Shinkansen that makes me salivate like Pavlov's dogs. Don't get me wrong, the French (TGV) and the Germans (ICE) all make fabulous high speed trains - 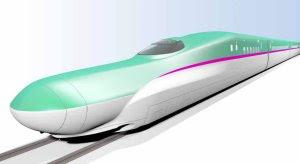 but nowhere else in the world do you have the extreme speed and punctuality, the cleanliness and comfort and a hot ōbento served at your seat. Japanese officials claim that the average train is late less than 30 seconds each year and that includes delays caused by earthquakes, typhoons and snow. (Ha! Only in Japan)! And in the line's 45 year history of transporting 7 billion passengers, there have been no deaths caused by derailment or collisions. (The shinkansen was originally developed for use during the 1964 Tokyo Olympics). 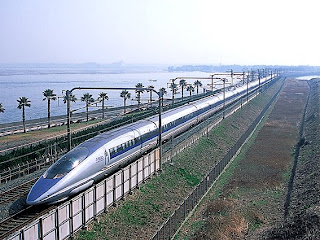 This is the present Shinkansen model in used, the S500 (image from wikipedia)

However, not satisfied with the status quo, JR Tokai is pushing forward with their plans to develop the magnetically levitated (maglev) Chuo Shinkansen. The superconductive maglev train holds the world speed rail travel record at 581 km/h (361 mph). This advanced transportation technology could in its commercial use - link Tokyo to Nagoya in 40 to 50 minutes (while traveling at a mere 500km/h). To provide some scale of that speed, commuters could go from Los Angeles to San Francisco in just over an hour. (To drive from LA to SF takes about 6 hours. Presently to take Amtrak from LA to San Francisco requires a couple if not more connections and over 8 hours of travel time). To be fair, I should note that construction of Chuo Shinkansen is anticipated start in Japan within the next two to three years and the line would open in 2025.

In the meantime, the E-5 series of trains is scheduled to take the rails in 2011 in Japan. This model will travel at a speed of 320km/h (200 mph). On the flip side, I live in a country where the railway tracks still used were laid around the time of the Civil War (1860's), and where every American industry is desperately looking for a handout from the government to stay afloat - I cannot help but admire that JR Tokai will cover the entire cost of the estimated 5 trillion yen to develop the Chuo Shinkansen by themselves without relying on any government subsidies.

The irony is that the maglev technology was first developed in America by Dr. James Powell and Dr. Gordon Danby in the 1960's. However, due to tremendous mind blowing short-sightedness, the ongoing development of this technology was terminated in the U.S. in the 1970's by the Department of Transportation under their faulty assumption that cars, trucks and planes would suffice for the future.

Aside from being infinitely more energy-efficient than flying and driving and virtually pollution free, there are many other potential positive repercussions of this superconductive maglev Shinkansen for Japan. While Tokyo is already an economic powerhouse, if easily linked by train to other urban centers like Nagoya and Osaka, connecting the rivaling Kansai and Kantō regions, these three cities could form a very dominant economic bloc. Additionally, with the option of taking a brief train ride from Tokyo to Osaka, Haneda Airport in Tokyo (the airport Tyler Brûlé cannot stop gushing about as the world's most efficient transit hub) would be able to increase its number of international flights and thereby strengthen its role as a gateway to Tokyo. Its proximity to Tokyo alone would make it a very attractive alternative to Narita Airport.
Hmm...mental note...make travel plans for Japan in 2025...book ticket for Shinkansen from Tokyo to Osaka...experience the future of travel.


For information on Maglev technology click here or here.