Egypt, like so many other countries, struggles to maintain that delicate balance between providing for its own citizens and catering to tourism. When it is a poor country, with a not so transparent government and with limited funds, this balance is often less stable and more tenuous. More often than not, time and resources are spent attracting foreign currency acquired through tourism instead serving your own poor local population. For well run countries, this may not be a toss up. Money comes in, invest in improving the plight of the country. Unfortunately, this does not seem to be the case in Egypt. 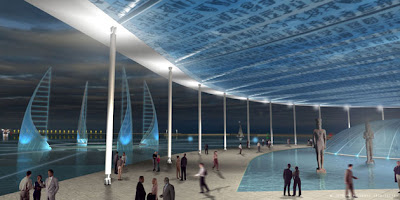 The city of Alexandria along the Mediterranean had captured my imagination long before our bus pulled into the city's environs. Like the rest of Egypt, Alexandria is densely layered with centuries of history. Founded by its namesake Alexandria the Great, it is the location of the Lighthouse of Alexandria (one of the seven wonders of the ancient world) and the ancient Library of Alexandria. It was ruled by Julius Caesar and Cleopatra and it is where the western world intersects the Arab world. 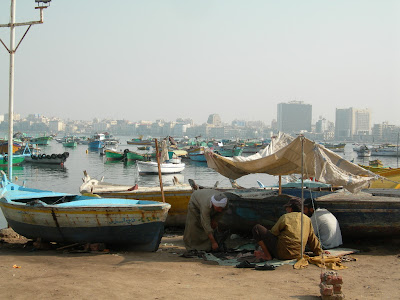 Alexandria along the Mediterranean

Modern day Alexandria unfortunately, is somewhat less glamorous. As Egypt's second largest city, traffic paralyzes the city and buildings that once spoke of the city's great diverse history are falling apart and blanketed with dense layers of pollution.

In 1994, just off the coast in the Mediterranean, divers discovered thousands of objects which included 26 sphinxes and pieces that are thought to be a part of the Pharos (Lighthouse) of the Alexandria. It is also believed that still underwater are the remnants of Cleopatra's palace complex. Built on an island, it was submerged by waves after an earthquake took down the island it stood upon in the 5th century. While some of these objects have been raised and can be viewed in a makeshift open air museum, there is now an huge somewhat controversial effort underway to build a giant underwater museum thereby allowing the 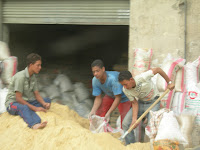 rest of the sunken treasures to be viewed.

French architect Jacques Rougerie, an expert in water-based construction projects, with the blessing of UNESCO, is designing an fiberglass tunnel that would allow a close-up viewing of the sunken monuments. If all goes well, construction on both the inland and underwater pieces could start in 2010 and be completed within two and a half years. It all sounds very exciting and glamorous, as well it should with a US$140 million price tag. However, there are many critics who are less than thrilled and view this project more as a money pit and a wasteful diversion of funds - which reminds me of another project.

While I was in Alexandria, I visited the Bibliotheca Alexandrina, the modern reincarnation of the ancient Library of Alexandria. Although it took hours to navigate through the streets of crazed traffic, the building in itself was incredible. It is light and airy and rich with exhibitions. Its technological capa 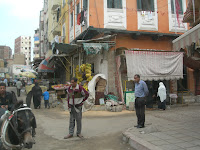 bilities are mind-blowing. The day I was there, college students had occupied every available table. It all seemed very hopeful (despite questions of censorship), this grandiose effort to restore Alexandria to its famous former historical intellectual glory. When I returned to Cairo, I shared my excitement with an Egyptian friend of mine. He was less enamored with the project. "We have spent US$220 million to construct this building of great learning, but Alexandria is nowhere near the great center of knowledge, research and learning it once was. All this money was spent on the construction of this one singular project when literacy rates in Egypt are so low (59% for women and 83% for men). The money could have been used to build a better education system throughout the entire country." For him, a flashy tourist destination won precedence over educating Egyptians. While there is free public education in Egypt, not one person I spoke to said it was any good. Instead they all agreed that there was dire need of a significant overhaul. 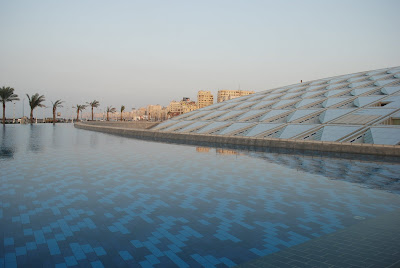 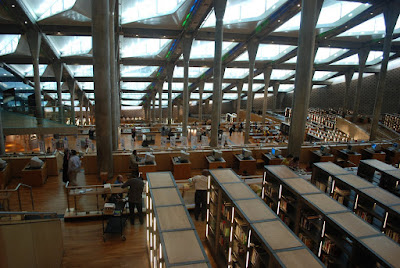 Now the sources for the financing for this underwater museum is still unclear. The Egyptian 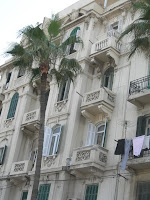 government is hoping that it will come from private companies and organizations. Even if and when it does come, the technological and environmental challenges are many. The under water currents and strong and the dirty murky sea water does not allow for much visibility which may require the construction of a separate underwater lagoon. While government officials are hoping that this museum will make the often forgotten Alexandria a bigger tourist draw, there are others who feel that the money would be infinitely better used fixing up the crumbling buildings downtown, many of which are extraordinary examples of colonial-era architecture. US$140 million dollars in infrastructure improvements alone would go along way in improving the lives of the 4 million residents of Alexandria.

All this brings me back to my original dilemma. How do you find an equitable balance when resources are scarce and the range of need is great? Egypt runs on tourism and building these solitary and yet undoubtedly incredible landmarks like the Library of Alexandria or this underwater museum can help to increase revenue for all sectors. (It did not go unnoticed that our guide slipped a few police officers some money in return for their aid maneuvering through

(The four vertical structures are reminiscent of the Egyptian fellucas).
the cramped streets of Alexandria). However, with a corrupt government, the money rarely ever filters down to the people who need it. So should international organizations be less supportive of these one off types of projects and more supportive of using funds to build local infrastructure, restore buildings, improve education and other social conditions for the Egyptian people? It is a tough call. Especially if you view, those submerged monuments as part of world heritage and global human history as I am sure UNESCO does.

All I know is that if this museum is ever built, I will be on that bus again to Alexandria to check it out but maybe this time while I am there, I will consider working with some organizations that are trying to improve the everyday lives of the local residents.

*The top two and bottom two images are pictures of the proposed underwater museum. Images are from Jacques Rougerie Architect.
Posted by Deeba Haider at 1:49 PM