Hip Hop Rising from the Rubble of Palestine

I wonder if when Tupac Shakur wrote the words to Holla if Ya Hear Me or when Public Enemy recorded Fear of a Black Planet did they ever imagine that their music and lyrics would resonate so powerfully with people on the other side of the world in the heart of the Middle East. Could they have imagined that their music would inspire the birth of Palestinian hip hop? But that I suppose is the incredible ability of music to transcend geography, nationality, culture and other boundaries to connect and inspire. This is the story of Slingshot HipHop, a documentary by New York based artist Jackie Reem Salloum about the rise of Hip Hop as a new form of expression and resistance amongst young Palestinians in Israel, Gaza and the West Bank.
Their music is no doubt political and full of angst and frustration after all they are trying to survive under the extreme violence of the world's longest occupation. Many of them have lost friends and family and endure daily the inhumanity of check points that tightly control their movements. These young Palestinians channel their anger and frustration into rap; using music to protest, to provide release, to educate, to share and cross boundaries whether they be political, cultural, sexual, religious or national. Their goal is to have some control over their own story and to share it with the world at large. 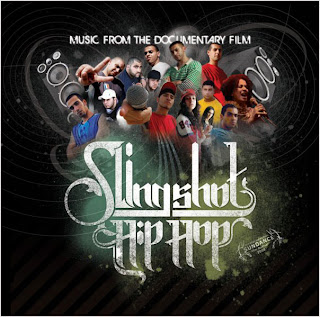 Salloum, the director, who is herself of Syrian/Palestinian descent turned to film-making to challenge the stereotypes of Arabs in the media. This documentary took her five years to complete, on a non-existant budget, heavily dependant on the kindness and generosity of friends and family. Her perserverence ultimately paid off, when the movie was shown in Sundance last year. While this documentary is rough around the edges, it is also enlightening, poignant, humorous and entertaining. And I just really liked the music.

This movie is slowly making its way around the world, often playing at smaller venues. The DVD is expected to be released in April 2009.

One of the groups she profiles, the originator of Palestinian Hip Hop - DAM (Da Arabian MC) said when they first started rapping, there was no such thing as Arabic Hip Hop and they had initially assumed that if they were to perform this type of music, they too would have to write and preform in English. Now DAM raps in both Hebrew and Arabic which has given them not only a strong Arab following but also an Israeli one.

Below are a few of their more popular songs:

Email ThisBlogThis!Share to TwitterShare to FacebookShare to Pinterest
Labels: Film and Music