Keeping on the subject of Egypt, I saw last night an incredible documentary. Perhaps one of the best I have seen in a really long time. It is called Garbage Dreams. It is the directorial debut of Mai Iskander and it is a tremendous effort. It is a powerful story about growing up, the hopes and dreams we carry in our lives, community, family, human and cultural survival. This movie also casts a beautiful light on a group of people who are too invisible to the rest of the world and gives them a voice.

The synopsis according to the website is as follows:
Filmed over four years, GARBAGE DREAMS follows three teenage boys – Adham, a bright precocious 17-year-old; Osama, a charming impish 16-year-old; Nabil, a shy artistic 18-year-old – born into the trash trade and growing up in the world’s largest garbage village, a ghetto located on the outskirts of Cairo. It is a world folded onto itself, an impenetrable labyrinth of narrow roadways camouflaged by trash; it is home to 60,000 Zaballeen (or Zabbaleen), Egypt’s “garbage people.”

For generations, the residents of Cairo have depended on the Zaballeen to collect their trash, paying them only a minimal amount for their garbage collection services. The Zaballeen survive by recycling the city’s waste. These entrepreneurial garbage workers recycle 80% of all the garbage they collect, creating what is arguably the world’s most efficient waste disposal system.

When the city they keep clean suddenly decides to replace the Zaballeen with multinational garbage disposal companies, the Zaballeen community finds itself at a crossroads. Face to face with the globalization of their trade, each of the teenage boys is forced to make choices that will impact his future and the survival of his community.

The movie is touching, poignant, at times humorous, and enlightening. We will find out on February 2nd whether Garbage Dreams, already shortlisted for an Oscar nomination, moves one step closer to receiving that well deserved golden statue.
Posted by Deeba Haider at 12:25 PM No comments:

Email ThisBlogThis!Share to TwitterShare to FacebookShare to Pinterest
Labels: Film and Music

A Trip to late 19th and early 20th Century Cairo

It has already been a couple days of dismal gray skies with uncharacteristic outbursts of heavy rain in Los Angeles and the weather forecast predicts a week more. Southern California spoils you with an abundance of warm sunny weather, that when it rains, I forget how to handle any other type of weather. So with my mind on warmer sunnier days, I started sifting through photographs from past travels and realized that there are a host of images that I took in Cairo, Egypt that I never posted. These pictures hold for me a fascinating revelation about Egypt that I have never read in any architecture, travel or guide book. If it was not for Ahmed Bindari, who spent the day showing me around Cairo, I would have never seen these extraordinary buildings. 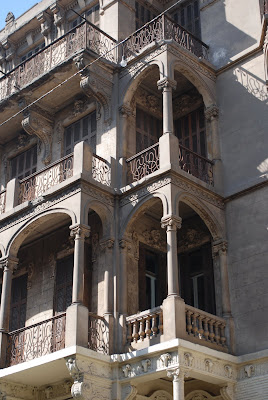 Most people when they visit Egypt see glorious buildings and treasures from Egypt's rich Pharaonic history and from their days as the heart and mind of the Islamic empire. Few people however pay much attention to the incredibly interesting hybrid architecture of Cairo from the 19th and early 20th century where art nouveau and art deco and motifs from Islamic architecture meld together create a new architectural language and identity... or where Jewish, Islamic and Christian icons are woven together throughout the facade and interiors of an apartment building.... Bindari documents these buildings for the Egyptian government. He has found most of these buildings strolling through the intricate network of narrow Cairene streets. And for one day two Novembers ago, he gave me a peak into this extraordinary world of modern Egyptian architecture. 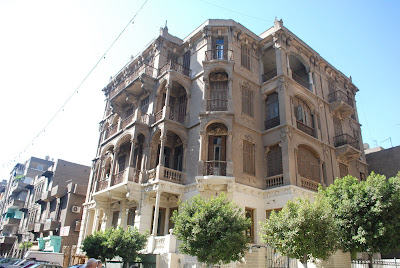 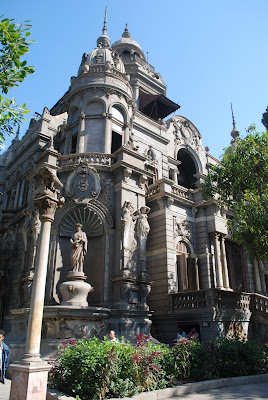 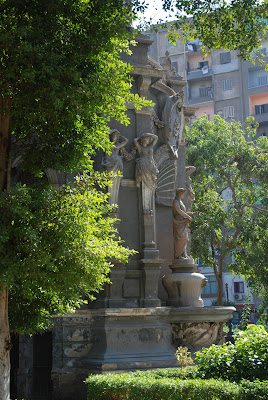 Yup, a Rococo style palace in the heart of Cairo built by an Italian architect for knife-maker Habib Sakakini. This building is visible from numerous axes, as handful of streets end at its doorstep. Despite initial plans to turn it into some sort of a museum - that has not come to pass. It is now used by a handful of rather lazy government officials who now refuse access to all visitors. We were granted access later in the day by a more friendly and accomodating caretaker after we supplemented his salary a little. 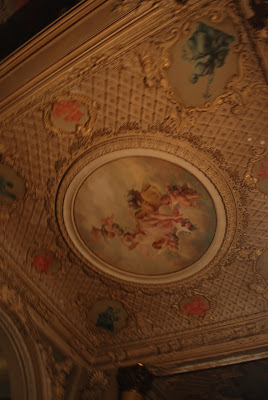 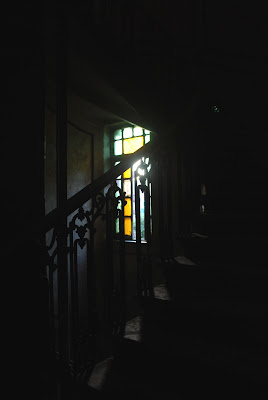 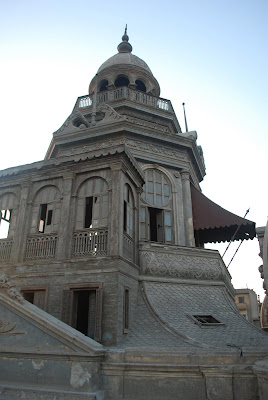 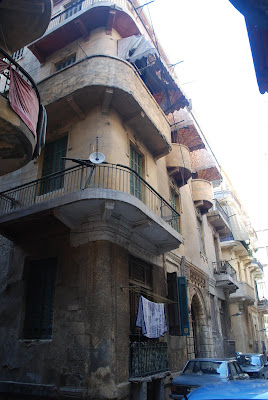 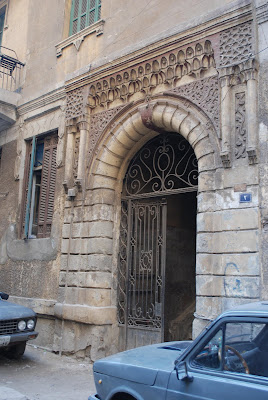 This apartment building located in the Daher neighborhood of Cairo, I call the mixed faith building. The exterior has a mixture of Islamic and Art Deco motifs while the interior (see below) has the star of David in its iron work and Christian motifs on the mailboxes (not shown here). 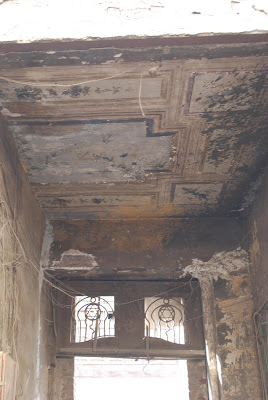 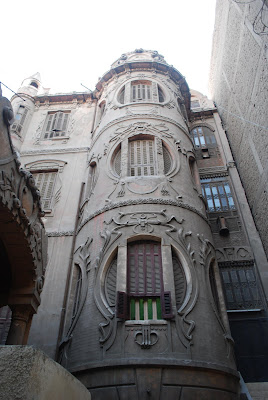 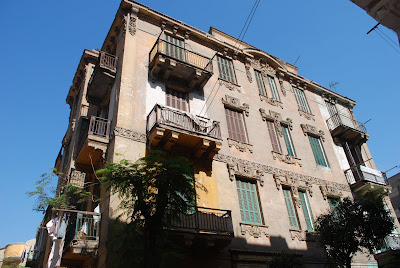 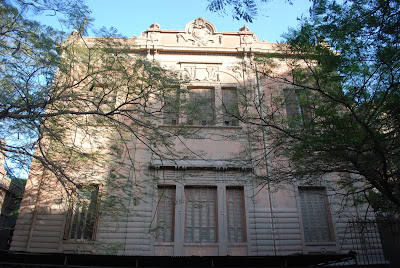 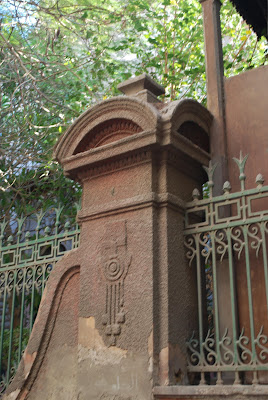 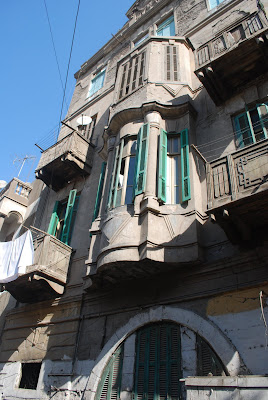 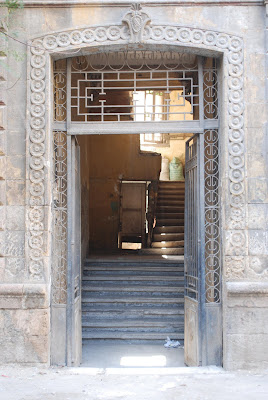 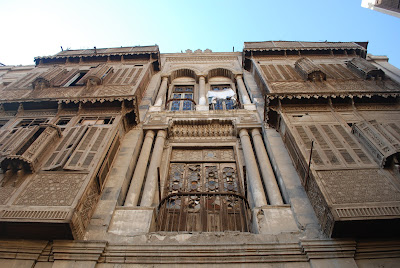 This incredible jewel of an apartment building in the historic El Darb El Ahmar district is being torn down by its owner. Half the interiors on the first and second floors are already destroyed. The only reason it is still standing is because of third floor resident Salah El-Din who loves this building, refuses to leave his apartment and is fighting to save it. For his determination and perseverance, he has paid a price - his wife and children have moved out. When we met Salah, he had padlocked the front door of the building to keep the owner out. The pictures below are the interiors of his apartment. 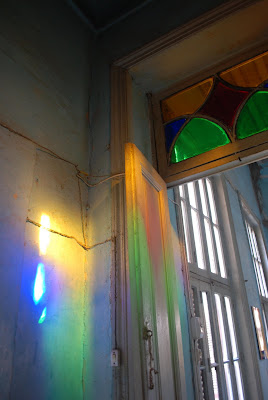 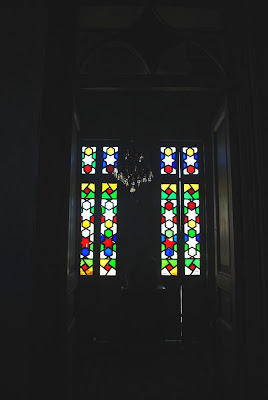 Unfortunately, many of these buildings shown here are under-valued and under-appreciated in Cairo and most building owners would rather tear down these buildings and build anew then work to conserve them. Cairo is so densely rich with incredible historical architecture yet so limited in funds, it is often too difficult a task to select which buildings should be saved and which destroyed.

For more images from 19th and early 2oth Century Egypt check out: www.egyptedantan.com/egypt.htm

For more information on Sakakini Palace:
http://www.touregypt.net/featurestories/sakakinipalace.htm
Posted by Deeba Haider at 1:48 PM No comments: