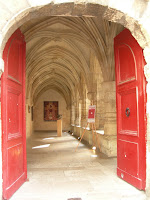 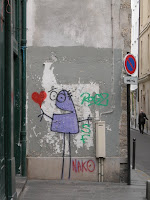 A friend's wedding in Athens a few weeks ago, gave me the perfect excuse to spend a few days in Paris on my way home to Los Angeles. This time, with no meetings planned, I was able to spend a lazy day wandering through the streets of Le Marais. While I did do a little shopping, much of it was curtailed by the strength of the euro, instead I spent the majority of my time sitting at cafes, bistros and a library/wine bar watching Parisian life bustle past me. 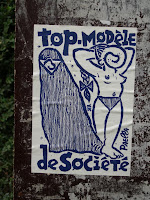 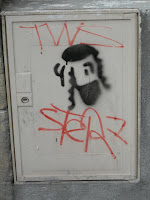 (which is where it gets its name), Le Marais started to take shape in the 12th century. The rich character of the neighborhood is a result of diverse layering of cultural influences that have settled here over time. Now Hasidic Jews intermingle with Paris' gay population. Young and edgy designers and up and coming artists display their work in small funky boutiques and chic yet edgy galleries.

There were a few places that I particularly enjoyed visiting - incidentally, they were either all on the same street, adjacent to each other or just around the corner. 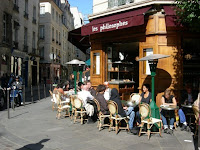 nch at les philosophes, located on 30, rue Vieille du Temple. (See left for meal and bistro). It was a great spot to watch people start their day. (Make sure you check out their existential bathrooms). 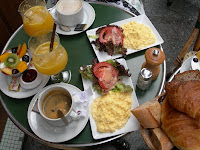 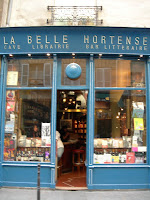 while reading a book, La Belle Hortense is a wonderfully charming and cozy bookstore/wine bar. They have an interesting collection of books which range in topics from colorful and animated children's stories to architecture and travel to the weighty pontification of French philosophers. We got their at 5PM, just when they opened, before the evening rush and plunked ourselves in the back on their comfortable black leather sofas. 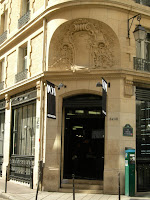 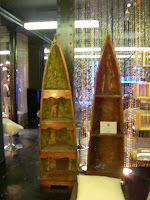 For an odd and unusual yet creative collection of clothing, furniture, accessories and other paraphernalia, check out DOM- Christian Koban (www.dom-ck.com) at 21, rue Ste. Croix de la Bretonnerie. (When I first walked by with its blaring music and black interiors, I thought it was a trendy bar or restaurant). Downstairs they have some rather smart pieces of furniture. (See above for the boat shelf). They also have stores all over Germany. 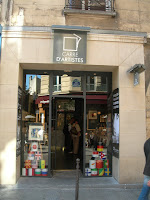 I bought two small paintings by a Cypriot artist at CARRE D'ARTISTES (www.carredartistes.com) - an art gallery that features the work of 30 artists from various backgrounds from around the world. New artists are profiled each week. The raison d'etre of this gallery is to introduce new artists, provide them a respectable venue to promote themselves and sell their work and at the same time, allow people from all socio-economic backgrounds to acquire original pieces of art. I think it is a very smart concept. They have a few locations in Paris and in other cities throughout France. The gallery I visited was located on 29, rue Vieille du Temple.

Around 7:30PM, after having spent about eight and a half hours wandering the neighborhood, we headed back to the hotel. But as far as new experiences go, my time at Le Marais was as close to perfect as they come.... 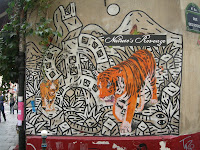 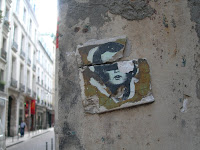