Adventures and discoveries in Dubai and its environs continue for our friend and her family. Here is another update on driving, sight seeing and celebrating the Eid, Christmas and the New Year in an Arab country: 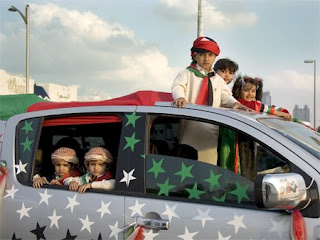 After a month filled with statutory and religious holidays and of course, sheer gluttony, January started off with some lethargy for us. December began with National Day (on December 2nd) commemorating 37 years since the creation of the United Arab Emirates. Many patriotic Emiritis decorated their cars with flags and massive paint jobs depicting Emiriti culture. We skipped the parades and festivities in favour of lounging at the beach and jumping the massive waves.
The following week we had 3 days off for Eid al Fitr. During the Eid break, we headed to another emirate named Fujairah on the east coast, passing first through Sharjah, the religious emirate where alcohol is completely forbidden. Sharjah is the emirate from which a lot of people commute to Dubai, as housing is much more affordable. Although is only about a 10 minute drive from the Dubai border, during rush hour it can take over an hour and a half or so. We also drove past the Hajar Mountains which is a large mountain range that runs along the UAE and Oman. It was nice to be outside the flat and big bustling Dubai city and see mountains again.

Furjairah city itself is not that exciting. It is quite old, small and run-down especially after glitzy Dubai. Our purpose there however, was not to have a beach holiday (what it is known for), but to see the mountains and find some wadis (valleys or dry riverbeds). With all the rain we had in Dubai, we were certain we'd see some flowing rivers and pools, but to our dismay we found only dry, empty wadis. We stopped by Wadi Al Hilo, an archaeological site and Wadi Warayah, but were disappointed to see them both completely dry. Since driving in the UAE (even with maps) is difficult given the poor signage, we got lost a few times on our drive and did not catch as many wadis as we had intended. 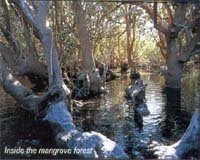 We enjoyed some desert-like scenery on our trip and stopped by Kohr Kalba, the 2000 year old mangrove swamp (oldest in Arabia) inhabited by a range of birds. We watched a flock of flamingos fly past us. We also saw people digging for crabs and setting up camp tents.

Christmas Season in Dubai
Since we had first arrived in Dubai during May's scorching summer heat, we had left a lot of the sightseeing activities for when we had company - so we promptly got busy playing tour guide and tourist around the city with the arrival of my family. Our first stop was the 7-star Burj al Arab (the hotel shaped like a ship's sail) - which was grossly overpriced and tacky in its decoration. (The dining room had some weird computer chip motif a garish color scheme). We had heard as much from everyone, but we had to see it for ourselves. The brunch buffet we had was good, but not necessarily better than other buffets we've had. The panoramic views of the sea and city on the 27th floor however, were spectacular.

On Christmas Eve, we took the day off work and went on a day tour to the town of Hatta, a popular weekend getaway for Dubai residents, located about an hour and a half away. En route, we had about 15 minutes of dune bashing in the desert (driving around sand dunes in a SUV) which was loads of fun, much like a roller coaster, but much more nausea-inducing. The desert was just breathtaking and had such super soft reddish sand. It felt like we were miles away from civilization, although truly, we were just a few minutes away from some nearby shops. The Hajar Mountains al 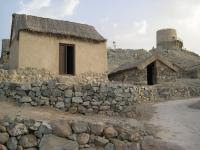 so formed the backdrop along our journey as we made another stop at the Hatta Pools. These are naturally forming mini-waterways (perhaps from underground springs). It was very pretty, but we decided not to dip in when we say garbage floating in the water. We had lunch at the Hatta Fort Hotel and then checked out the Hatta Heritage Village which had preserved ancient homes. Upon our return to Dubai, we made another stop at the Ras al Khor Wildlife Sanctuary at the foot of the Dubai Creek. We spent a bit of time just sitting and watching flamingos and other birds from a distance.

New Year's Eve
We woke up New Year's Eve morning to hear on the radio that Sheikh Mohammed, the ruler of Dubai, had declared that all events were to be cancelled that night to show solidarity with the suffering of the Palestinians. Ultimately, only the fireworks and live bands were cancelled. Most of the events still went on pretty much as scheduled, but with softer music and no over top new year's eve paraphernalia.

Dubai Shopping Festival
January 15th marked the start of the annual Dubai Shopping Festival (DSF) which meant a lot of scurrying around to the different malls to find the best deals possible. We had been holding off on a few purchases in anticipation of this event and there were some awesome sales, some up to 70% off. This year however, DSF was a bit more subdued as the usual festivities (fireworks and live performances) were cancelled out of respect for the war on Gaza. Dubai is also not as filled with tourists as it has been in past years during the festival. The retail sector here, next to the over inflated real estate market, has also been hit hard.

Lastly, update on driving in Dubai
Some of you have asked about my driving progress. I haven't driven in a few weeks and the longer we live here, the less inclined I am to drive given that Dubai has one of the worst traffic accident stats in the world (196 deaths in the first 9 months of 2008, an improvement from last year, but this does not include the thousands of non-fatal accidents). This is actually quite high considering that in a population of 1.5 million people, a huge chunk of the population don't drive. We actually witness the manifestation of this stat all the time with reckless, dangerous and aggressive drivers - particularly amongst Emiratis who are above the law. One such crazy driver ran over an expat woman killing her out of road rage directed at her cab driver. His trial has been postponed due to the non-attendance of witnesses - hmmm...coincidence, Sherlock?! Currently, I am still mulling over the need to drive over the risk of a heart attack and an accident. Some people we know are consistently getting into minor fender benders, even in parking lots. Hearing these stories, aren't a huge incentive for me either to get behind the wheel.
Posted by Deeba Haider at 12:28 PM