I'd Rather Be Anthony Bourdain

Years ago when I sat in the cubicle of my mind-numbing job and I fantasized about whose job I would like, who I would like to emulate - my thoughts would veer towards the extremely respectable, very erudite Fareed Zakaria. I thought I would take great world events and analyze them for the public, providing profound insight and knowledge. But now years later, a little more weary, tempered by life and after tonight, I have no doubt - I would rather be Anthony Bourdain. 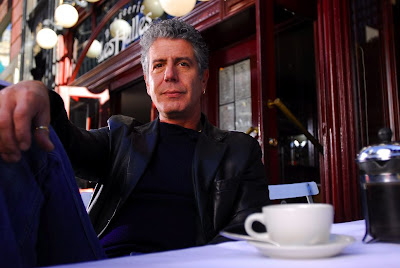 I have literally just returned from seeing his show in Los Angeles - part of his "No Reservations" 2010 tour and I think I laughed more and harder than I have at any comedy show. How did the guy become so witty? A regular viewer of his No Reservations show on the Travel channel and having read a few of his books - I had assumed that much of his witty repartee came from great ideas and careful editing. But no! He writes exactly as he speaks. After an hour of hilarious commentary that started with filleting the majority of stars on the Food Network, to his time on Top Chef, to his concerns about this nation's food supplies to lessons on how to travel, the second half of the evening was spent on Q&A. Granted none of the questions were too provocative - he nevertheless answered each with tremendous animation, vivid descriptions and that dry sarcasm that his fans have come to crave and expect.

He started the evening sharing his ceasefire with Rachel Ray. He then continued with his most horrifying life experience yet - a run in with Andrew Cuomo, NY State Attorney General and his girlfriend, Sandra Lee - another celebrity on the Food Network who he claims "does to food what Hitler did to Poland" with her show Semi-Homemade. He pays his respects to Mario Batali and Emeril Lagasse; throws a few gentle jabs at Bobby Flay, who after all, he argues, is still a real chef and acknowledges the fine cooking skills of Giada de Laurentiis (and her unusually large head) and Ina Garten (and her uncomfortable obsession with Jeffrey, her husband). He also talked about how he preferred Iron Chef Japan to Iron Chef America due to the lackluster judges. You have superior chefs doing incredible work and then you have "mind douche Cris Angel as a judge!"

What I appreciated most about his talk however, were his comments on travel and on how to travel. "If you are lucky enough to travel, make the most of it." Don't be wasting your time in a Starbucks or at Planet Hollywood. "Have an adventure. Have a story to tell.... Don't worry about dirt. Eat like the locals eat." And follow local customs as best you can. That comment was followed with how much he dreaded Russia. There he said, we have to do a lot of "professional drinking...and we're not alcoholics." The day starts with 3 shots of vodka for breakfast, and ends with 14 to 17 shots for dinner. Every day. It's not about whether you will vomit, its when.

Food is as personal a form of expression and communication as it gets, Bourdain continues, and when you travel and if you are offered something that might rub uncomfortably, even harshly against your personal sensibilities and principles - being polite trumps everything. He likens the experience to what he calls "Grandma's Rule." You may go to grandma's house for Thanksgiving, and the food may be terrible but you will eat it all and ask for seconds and thank her profusely in the end - because it is the right and decent thing to do. Cooking, he said, is about control. Eating is about total submission.

During the Q&A when he was questioned about his life choices he said, "I'm having a really good time. I don't have any regrets. Life has been really good.... This celebrity chef thing is sweet." His comments reminded me of a interview I did with writer Pico Iyer who said, if he won the lottery today, tomorrow, he would still wake up and do exactly what he has done everyday which is sit at his desk and write. I have no idea how much money either of these people have in the bank but as far as I am concerned they are some of the richest people I know.
----

Some final thoughts based on questions asked Bourdain:
Posted by Deeba Haider at 12:06 AM