I almost fell off my bed yesterday, when last night, I was flipping through March's issue of Travel and Leisure magazine and came upon their winners for the 2010 Design Awards. The article itself is not what surprised me. Many of their winners like the Santiago Calatrava's train station in Liege, the renovation and restoration of La Mamounia in Marrakesh, the Mondrian's Spa Miami's South Beach or the design of the Nomiya Restaurant in Paris (see left) seemed like obvious choices. What threw me was the winner of design for the best large hotel...are you ready?...extended drum roll...

MOTEL 6!
I know! I was floored too! So I had to do some digging this morning.

Motel 6, the 1960's American icon under the direction of European hotel company Accor is getting a major makeover known as the "Phoenix" prototype (as in the bird that symbolizes rebirth and renewal). The London design firm Priestmangoode is responsible for the hip, bright, utility driven new look. Instead of dated carpeting and furniture and old dizzying bedspreads there is now faux-wood floors (made from un-used industry scraps - very environmentally friendly), sleek furniture, 32 inch flat screen televisions and multi-media panels for ipods and laptops. The bathrooms have granite counters and round bowl-like sinks. While I have stayed in other boutique-like budget priced hotels in Europe - I haven't come across such a thing in the U.S. 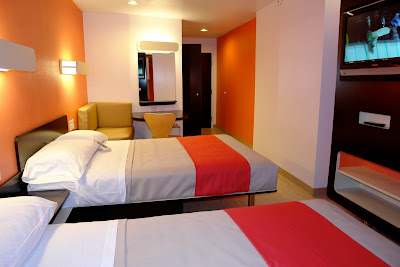 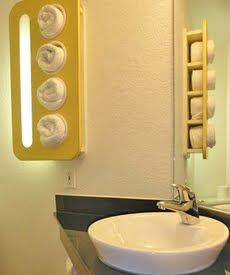 While the price today isn't quite the $6 it was when it first opened in Santa Barbara, it is by comparison still very reasonable. Just goes to show that good design doesn't have to be expansive or exclusive to the wealthy. It used to be when I went on road trips - I would drive right by a Motel 6 when looking for a place to stay. But now while they are slowly roll out this make-over, my curiosity is going to purposefully bring me to a city that has a newly redone Motel 6. As an architect and a travel junkie, this I have to check out. Road trip anyone? 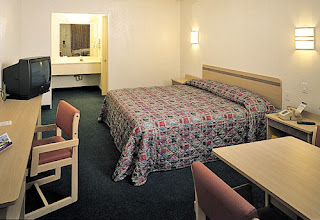 For those who never stayed in a Model 6 before the remodel
- this is what it looked like.
Say Bye-Bye to depressing.