When you have nomadic blood coursing through your veins, there will come a time, or many times, when you will have to pack up your bags and leave one city for another. And oftentimes, despite how emotionally ceremonious and weighty this decision and entire process may be, the actual act of departure from one city to another is often rather low key. When my husband and I finally left New York after seven years, we took a car service to the airport alone, checked in, boarded the plane and that was the end of a monumental chapter in both our lives. I had the same experience as a teenager, when my family left Tokyo after thirteen years. I was leaving the city that I had essentially experienced my entire childhood for a completely new life and experiences with no pomp and circumstance. Perhaps that is why this work by artist Jon Jackson has resonated with me so much; aside from the fact, that it is just very witty. Jackson is leaving Los Angeles after numerous years for a new life in New York City and decided to give it the proper ceremony and attention it deserves through a series of billboards around LA.

Email ThisBlogThis!Share to TwitterShare to FacebookShare to Pinterest
Labels: Cities, Relationships, some ponderings...

As if I didn't miss New York City enough already...

Posted by Deeba Haider at 10:00 AM No comments: 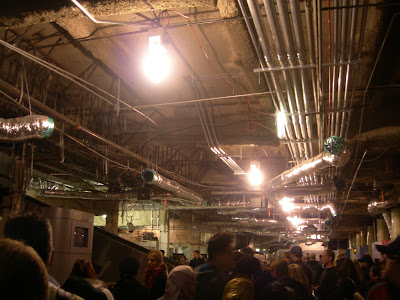 Is this the dark underbelly of the city? Is this crowd miles below the city surface in some dingy underground tunnel?

Welcome to LAX. Los Angeles International Airport, the gateway to the American west coast. This is what I saw after 20 hours travel at baggage claim earlier this month. If this was my first time to Los Angeles, or worse yet, America, this would be my very first impression of America. How absolutely horrid! Global cities around the world, like Dubai, Singapore, Amsterdam, Doha, Hong Kong are competing to build the most efficient, luxurious and state of the art airport terminals rich with every amenity and comfort. Airports are not only big business, they are also the gateways to the city if not the country or the region. They are the very first impression, for ever visitor.

The U.S now requires visitors from friendly countries like New Zealand, the United Kingdom, Norway, Japan, Singapore, Finland, Luxembourg and Switzerland the added hassle of applying for visas-wavers to enter the U.S. Then once you disembark in the U.S., more often than not, you are confronted by extremely unfriendly immigration officers. I appreciate that their job is a very important one but why do they have to be so rude? On my most recent travel back from England, the immigration officer that attended to me and my husband, did not smile, do not even look at us, barely grunted two words. (I should add that this was at Newark airport but I have had similar experiences in LAX). I haven't even addressed the excruciating long lines, where you are shoved around like cattle, before you even see an immigration officer.

Now I know that LAX has been undergoing some intensive renovations. However, it has been under construction since I moved to this city four and a half years ago and I have yet to see any improvement. California, much like the rest of the country is teetering on bankruptcy. Tourism has historically brought California a large bulk of its revenue. Can we really afford to chase away well intentioned tourists?

I have lived in America for about eighteen and a half years now. Many of the people I have met here and befriended are extraordinarily warm, giving, generous and welcoming Americans. However, if all you knew of America was experienced in the airport, you would never know that. 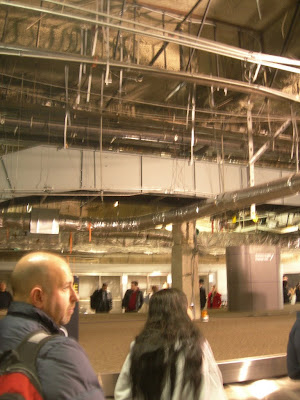 Posted by Deeba Haider at 4:06 PM No comments: